As a boutique single estate vineyard, Hentley Farm specialises in producing premium single-block wines from the vines grown on our 150 acre vineyard and mixed farming property.

Here at Hentley Farm, we think of ourselves as ‘winegrowers’ with our winemaking style simply guiding the fruit from vine to bottle allowing the unique characteristics of each vineyard block to shine through. As a result, Hentley Farm produces distinctive wines that display elegance, subtlety, depth and complexity.

With such a key focus being on the vineyard, ensuring our agricultural and environmental practices are sustainable is a key element of what we do.

Since our first vintage in 2002, Hentley Farm has cemented its position as one of Australia’s leading boutique wineries, being awarded the rare 5 Red Stars by acclaimed wine writer James Halliday with the comment, “It hardly needs to be said the emphasis is on quality.”

Vineyard founder Keith Hentschke went against the grain when selecting three hillside sites to plant Cabernet, and the risk has paid off

OUR STORY
Founders KEITH & ALISON HENTSCHKE researched for years to find a Barossa Valley site that would produce world class single estate wines. They discovered the property that would become Hentley Farm, with the sought-after red-brown soils of the Western Barossa, and remarkable diversity of soil types, aspects and altitudes.
OUR VINES
Like many of the sites that the world’s best wines are grown on, it’s a marginal site. Keith’s expertise as an agricultural scientist ensured that the establishment of our vineyard blocks, with plantings of clonal material selected for orientation and aspect, best utilized the great variety of terroir that enable us to produce unique single estate and single block wines.
OUR WINES
Hentley Farm’s chief Winemaker ANDREW QUIN has taken a slightly unusual road to winemaking, transitioning from his original field of study – horticulture. For Andrew, winemaking provided  an unparalleled opportunity to combine scientific knowledge with his artistic flair, in the pursuit of creating something that others could enjoy….great wine!
In his initial years post-study, Andrew travelled and worked around the Northern hemisphere, starting in California with premium Sonoma producer St Francis winery before heading to the old world where heworked for wine negociant Jacques Lurton in the Languedoc.

A combination of techniques including whole bunch addition and extended maceration were used to ensure complexity and varietal balance. The wine was pressed into a combination of new (10%) and old French (90%) oak, where it underwent secondary fermentation. The wine was matured in oak for a total of 10 months.

Vintage
The 2016 calendar year leading up to the 2017 vintage produced the wettest winter for 20 years! This rainfall and associated cooler weather conditions resulted in a delightful slow development across the growing season with flowering and subsequent fruit set 2-3 weeks later than recent vintages. Warm and consistent conditions followed with vines balanced and happy heading towards Christmas. A return to cool weather and rainfall continued the trend of slow development with veraison kicking off 4 weeks later than expected. After one last summer drop of 50mm in early February we got the weather we were looking for with dry conditions and good ripening throughout harvest. The vintage conditions have created outstanding flavour development and natural
acidity with the resulting wines showing great poise and balance.

Vineyard
The fruit from our three Cabernet blocks were blended to create this wine. All blocks have shallow clay over limestone soils, easterly aspects, a gentle slope with a north-south orientation.

Tasting Notes
Herbaceous characters of mint, capsicum, tomato leaf combine with rhubarb, plum and Campari like bitter orange to create a nose that is both varietal and vibrant. The palate begins with grippy tannins that lead to a mid-palate filled with sweet fruit and rosemary. On the back black cherry and choc-mint intermingle with grippy tannins providing a long finish. Freshness and vibrancy the key to this style. 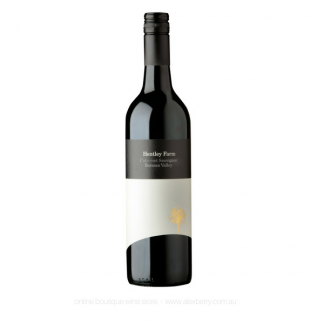